How long does it take to achieve restitution of a looted antiquity? In some cases 25 years or more 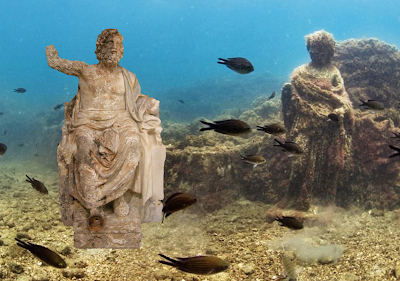 On October 27, 2018 a first century BCE, marble statue of Zeus, seated on his throne, finally moved to its permanent home, the Archaeological Museum of the Phlegrean Fields in the Castello Aragonese di Baia.
Like its own lost version of Atlantis, the Campi Flegrei, as the area is known to Italians, is a large, highly active volcanic region, nestled in the northern portion of the Gulf of Naples.  Declared a regional park in 2003 and lying mostly underwater, the archaeological site of Baia, named aptly for its thermal waters, guards treasures from Rome’s ancient past, some of which have been transferred to the Archaeological Museum for land lovers to see and appreciate.
A site of profound and priceless beauty, the submerged archaeological park preserves an astounding collection of Roman statues frozen in liquid time along with ancient villas, public baths, private grottos and even entire city streets. All of which serve as testimony to the charm of the now submerged city where many of Rome’s elite and influential patricians once spent their time relaxing.
But back to the statue of Zeus and its purchase
Guided by its then antiquities curator, Dr. Marion True, the J. Paul Getty Museumin Los Angeles purchased the 75-cm-high “Zeus Enthroned” from Lawrence and Barbara Fleischman in 1992.  The Fleischman’s in turn had purchased the statue of the Greek god five years earlier in 1987 from British antiquities dealer Robin Symes.
To read the rest of this article please follow this link to the ARCA blog