Recognising that culture has moved to the frontline of wars and conflicts, both as collateral damage and as a direct target, ARCA stands with the United Nations Educational, Scientific and Cultural Organization (UNESCO) and with the Archaeological Institute of America (AIA), founded in 1879, and North America’s oldest and largest archaeological organisation, in advocating for the preservation of the world’s archaeological heritage during conflict.  Likewise believing that unwarranted attacks on culture arouse hostility in local populations, offers adversaries a potent propaganda weapon, and undermines support on the home front and among US military allies, ARCA condemns the intentional targeting of ALL cultural heritage sites during conflict in unequivocal terms.

The U.S. Department of Defense’s Law of War Manual as well as the 1954 Hague Convention for the Protection of Cultural Property in the Event of Armed Conflict and its two subsequent Protocols clearly prohibit the intentional destruction of cultural heritage during armed conflict, unless said historical site has become a military objective and there is no feasible alternative for obtaining a similar military advantage.  Despite these obligations, included in international treaties, UN Security resolutions and military regulations, ARCA as a group of civilian observers to the globe’s conflagrations, remains concerned about cultural property protection in host and occupied nations, especially where regional and global conflict or symmetrical and asymmetric warfare are, have, or might place a country’s heritage at risk.

Seventy-six years ago, on 29 December 1943, then General Dwight D. Eisenhower, commander of United States forces in Europe as well as commander of the Allied armed forces, who fully understood the complexities of war, understood the need for protecting culture in times of conflict.

Putting his thoughts and concerns to paper, Eisenhower wrote: 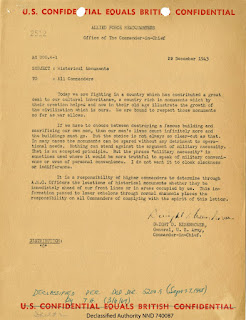 Today we are fighting in a country which has contributed a great deal to our cultural inheritance, a country rich in monuments which by their creation helped and now in their old age illustrate the growth of the civilization which is ours. We are bound to respect those monuments so far as war allows.

If we have to choose between destroying a famous building and sacrificing our own men, then our men’s lives count infinitely more and the building must go. But the choice is not always so clear-cut as that. In many cases the monuments can be spared without any detriment to operational needs. Nothing can stand against the argument of military necessity. That is an accepted principle. But the phrase “military necessity” is sometimes used where it would be more truthful to speak of military convenience or even of personal convenience. I do not want it to cloak slackness or indifference.

It is a responsibility of higher commanders to determine through A.M.G. Officers the locations of historical monuments whether they be immediately ahead of our front lines or in areas occupied by us. This information passed to lower echelons through normal channels places the responsibility of all Commanders of complying with the spirit of this letter.

Understanding that when armed conflict, intentional destruction and looting damage or destroy cultural heritage, peace and security are simultaneously threatened, ARCA began offering a select number of Minerva scholarships to heritage professionals working in the conflict and post conflict countries of Iraq, Syria, Yemen, Libya and Egypt.  Since 2015 these Middle East focused scholarships have provided cost-free training to individuals living and working in specific conflict and post-conflict countries, involved in heritage protection.  These scholarships were established under the premise that cultural heritage personnel in at risk source countries, tasked and trained in art crime and cultural property protection, serve to help communities to understand, prevent and mitigate crimes against cultural in their respective homelands.

Extending that advocacy into 2022, ARCA has approved two full-tuition scholarships (flights, room and board excluded) for its Postgraduate Certificate Program in Art Crime and Cultural Heritage Protection to US military or NATO-affiliated personnel or allied civilians working to protect heritage in a military context and co-operating with the civilian authorities to avoid collateral damage of cultural heritage sites from military operations.

Understanding that cultural property protection can be a force multiplier instead of an ethnic or regional divider, by concurrently contributing to international and domestic stability and goodwill, interested civilian and military personnel should write to ARCA for further information on what is needed to qualify and apply at:

Why not help us change the narrative and curb this scourge by de-weaponising cultural heritage and by showing respect for the sacrifice of those working in military settings ethically tasked with saving culture, despite the complicating exigencies of conflict.

ARCA supports the safeguarding of movable and immovable cultural heritage in countries of conflict.

“To safeguard these things will not affect the course of battles,” George Stout wrote in a draft proposing the protection of monuments to the U.S. government in 1942.

The protection of cultural heritage is a fundamental tool to support the development of peaceful societies, strengthen sustainable development, prevent violent extremism, and suppress terrorist financing.

Art crimes committed in symmetrical and assymetrical conflicts are an ever-expanding phenomenon that is increasingly difficult to prevent and to ultimately prosecute.