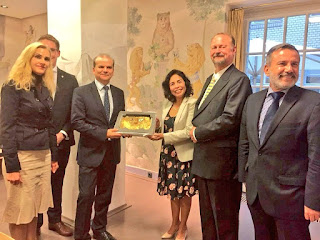 In a legal battle that has taken 19 years of litigation, Germany’s Plenipotentiary of the Free State of Bavaria, Dr. Rolf-Dieter Jungk, has turned over the eighth-century pre Columbian gold Lambayeque (Sicán) funerary mask to the Peruvian Culture Minister, Patricia Balbuena, at the Peruvian embassy in Berlin on Thursday. The priceless mask, made of hammered sheet gold alloy, was confiscated in Wiesbaden in 1999. 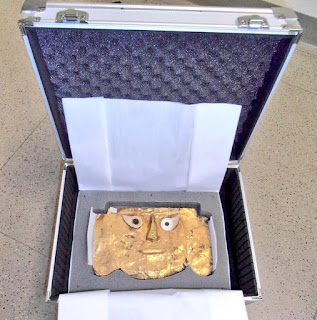 Decorative masks such as these have been found in tombs in the Lambayeque region of Peru, near the modern city of Chiclayo. As they lack perforations to see with, or holes to breathe through, they are believed to have been created solely as ornaments for the deceased, and likely covered the faces of high status individuals as part of their burial processes. 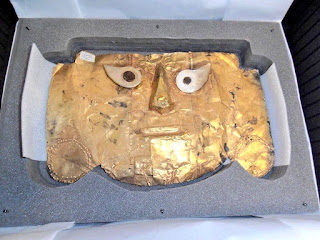 According to investigations by the Fiscal Police of Peru, the mask is believed to have been smuggled out of Peru sometime in 1997 and was brought to Germany by Aydin Dikmen. Dikmen was arrested in 1998 for his role in selling looted mosaics from the 6th century church of the Virgin of Kanakaria in the village of Lythrangomi sold on to Peg Goldberg in the United States.  The mask was formally confiscated in 1999 by the INTERPOL Office in Wiesbaden, Germany.
The case for restitution took years, winding its way through the Regional Court of Munich.  In December 2016, the 6th Civil Chamber issued a sentence ordering the release of the Sican Mask, confiscated by the Munich Prosecutor’s Office and authorized its delivery to the Peruvian State.
For more information illustrating the search for recorded cultural goods, stolen, auctioned and repatriated from Peru, please follow the excellent writing at Memoria Robada.