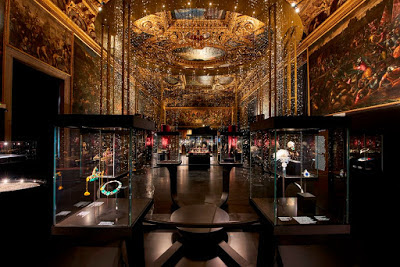 Eight months into the investigation, Italian news sites have begun reporting more details on the band of thieves believed to be behind the theft of part of the jewellry collection of Qatar’s Sheikh Hamad bin Abdullah al-Thani. The jewels were stolen from an alcove just off of the Sala della Scrutinio at the Palazzo Ducale during a brazen, broad daylight, robbery from the “Treasures of Mughals and Maharajas” exhibition on January 3rd.
Reconstructing the events surrounding the 10 am theft on the final day of the exhibition authorities have apparently discussed their hypothesis with one or more members of the Italian press.

According to a report first published on Twitter by Mediaset Journalist Clemente Mimun, it is believed that the thieves may be members of a Croatian and Serbian criminal network which specialized in high value thefts, known to have commited other offenses in Italy and other countries.  No information is given in Mediaset’s formal article several hours after Mimun’s tweet, nor in La Repubblica’s subsequent article as to why authorities believe the squad is made up of Serb and Croat nationals or indicating what information aside from general speculation would lead to this assumption. 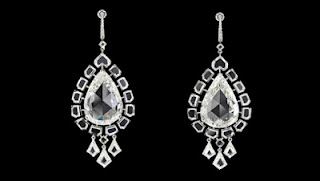 During the January 3, 2018 incident, two thieves, one serving as lookout, wearing a buttoned sweater and a fisherman’s beanie, and a second serving as principal actor, took a remarkable 20 seconds to open, then pocket a pair of teardrop diamond earrings and a heavy brooch made up of diamonds, rubies, gold, and platinum. 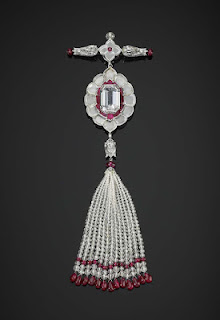 Given that the display case and its alarm failed to activate or activate in a timely manner when the glass case was breached, it is reasonable to assume that the pair of thieves might have had insider help.  Perhaps from someone either connected to the museum with knowledge of or access to the exhibitions alarm systems as they were expressly installed for this specific exhibit and in normal circumstances would have been expected to sound an alarm as soon as the display case was opened which would allow time for the perimeter to have been sealed.
Gone in a Bling
In the CCTV camera footage a clean-shaven man wearing a hooded puffer jacket and casual pants, sporting a traditional coppola style flat cap, can be seen at first viewing the jewels in several display cases at a leisurely pace, along with five other individuals, one of whom is believed to have served as a lookout.
Once the room clears of potential witnesses, the thief, working quickly and discreetly, but in full view of the CCTV camera, opens the glass door on the case and pockets the jewellry in the pocket of his jacket.  Afterwards the pair calmly blend back in with the rest of the museum’s patrons, and casually exit the Doge’s Palace before security has time to apprehend them.

Given that the security for this event was specifically requested and installed as a condition of the exhibition of the Sheik’s jewels, it is reasonable to believe that the culprits were practiced experts, perhaps those who also had advance knowledge of the Doge’s security routine, and the timing it would take for security to react to their breach.

As in the Venice heist Pink Panther thefts usually involve prior preparation and advanced skill, often casting nondescript individuals to case locations of potential robberies prior to their execution.  In one particularly dramatic theft on May 19, 2003 at Graff on New Bond Street in London a member of the group was able to make off with more than thirty million dollars’ worth of diamonds at in less than three minutes.

Whether or not the Doge’s Palace Museum theft is related to the Pink Panthers is unclear, but should they be, they will likely benefit from the inventive perpetrators uncanny ability to fence traceable high-end goods. In the past law enforcement authorities have indicated that the Panther network consisted of between twenty and thirty experienced thieves at any given time, with facilitators in various cities providing logistical assistance.   Often, stolen diamonds end up in Antwerp as well as among the collections of indifferent clients in wealthy countries like Italy, France, Russia and Switzerland.