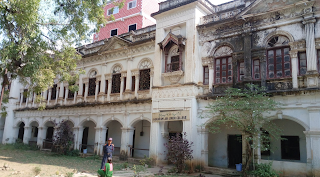 According to local authorities, thieves broke into the Nizam Museum housed on the first floor of the Purani Haveli palace located in Hyderabad, Telangana, India sometime on the evening of Sunday, September 2, 2018.  The palace, located just a few kilometers away from Chowmahalla Palace, is also home to a library and the Mukarram Jah Technical Institute.

In the past the palace was once the official residence of the Nizam, the last of whom ruled over the region from 1911 to 1948, when Hyderabad State was annexed by India.  The museum showcases many gifts that the 7th and last Nizam, Mir Osman Ali Khan, Asaf Jah VII received on his silver jubilee in 1936.  The museum  has been privately run by the Nizam’s Jubilee Pavillion Trust, and managed by descendants of the Nizam since the year 2000.  It houses approximately 450 objects in its collection.

Dislodging a four-feet wide ventilation grill, the burglar or burglars appear to have worked as a coordinated pair, dropping some 20 feet down into the exhibition gallery.