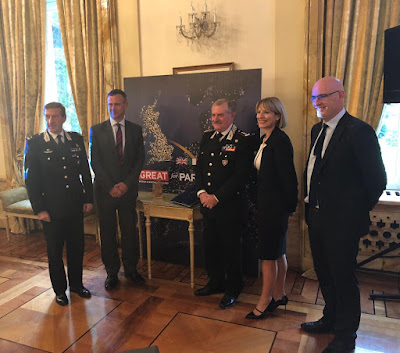 In a formal ceremony on Thursday the 11th of October at the Villa Wolkonsky, the official residence of the British ambassador to Italy in Rome, UK authorities returned two Etruscan artifacts recovered by the Metropolitan Police in consultation with Italy’s Comando Carabinieri per la Tutela del Patrimonio Culturale.  Both objects had been located within the vibrant London antiquities market.
The bronze Etruscan statuette of Lares had been stolen from the Museo Archeologico di Siena in 1988.  According to Detective Sergeant Rob Upham, on hand for the handover from New Scotland Yard’s Art and Antiques Unit, the terracotta Etruscan askos (a flask with spout and handle shaped like a sphinx), had once passed through the inventory of a convicted Italian ancient art dealer.   Elaborating to the press Upham added that the seller of the object in the UK appeared to be in good faith and therefore was treated as a cooperating witness during the Metropolitan police investigation.
To read the rest of this article please follow the link to the ARCA blog
Share This